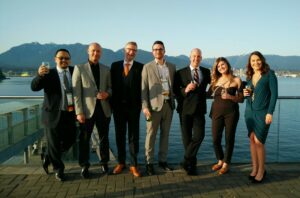 Under bright springtime skies, Vancouver, BC put its best face forward for visitors to the Canadian Produce Marketing Association’s annual trade show last week. Not to be outshone, Oppy embraced customers, growers, and members of the trade media in a style that only a company with 160 years of local history could achieve.

Our hockey squad of Doug Dunlop, David Wazny, Myles Coueffin, Edwen Ma, Wesley Stein, Jason Shelefontiuk bested the competition in the 3-on-3 tourney. With a high-energy display booth showcasing Oppy products as our home base, we were involved in media interviews, customer meetings, and industry committee discussions.

Meanwhile, a heroic effort behind the scenes was made by many to assure our brand and company was represented well. Thanks and congratulations to all who contributed to Oppy’s successful presence at this year’s CPMA!