Day in the life of… Senior Sales Representative Ryan Hare 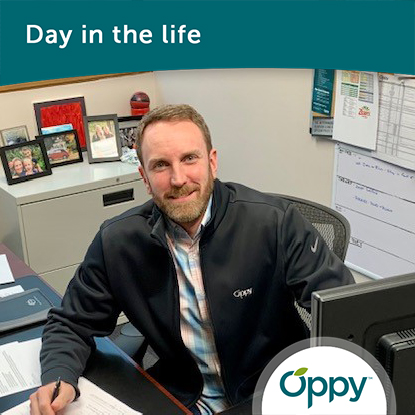 Born in Washington, DC and currently residing in a suburb along Lake Michigan, Ryan studied food marketing at Saint Joseph’s University and has a MBA from Salve Regina University. Ryan’s passion for our industry began when he was a 15-year old working in Genuardi’s Family Market’s produce department and serving as a merchandising intern for Clemens Markets through college.

Ryan has been at Oppy for 18 years and it still remains a mystery how he got the attention of Jerry Smirnotis. Somehow Jerry got ahold of Ryan’s resume shortly after he finished his degree and offered him a job as a sales assistant. During his time at Oppy, Ryan has worn many hats, including sales/EDI coordinator, greenhouse category coordinator, Ocean Spray cranberry deal manager and his current role as senior sales representative. In a typical day Ryan supports his accounts by managing current business and looking for new opportunities to increase sales where his assigned categories need focus. Ryan is usually very busy, but during slower times of the year he likes to, “tie up loose ends, work with our teams on open files, and touch base with my account buyers just to make sure we’re not missing anything and keeping the relationships strong.”

Ryan believes that the people are what make Oppy special, which he discovered this first-hand when he left Oppy for a few months to work on a farm. “The grass isn’t always greener on the other side and if I learned anything, it was that the people and the culture matter,” he said. “I really missed it all and I’m very happy to be a member of Oppy’s Boomerang Club.”

For fun, Ryan enjoys spending time with his girlfriend Kristin and her two kids, Addison and Calvin. They have a full house with two dogs, a fish and a snail. Active and athletic, they enjoy gymnastics, baseball, basketball and swimming. Ryan was a competitive rower for a total of 20 years before retiring to coach Calvin’s baseball team this coming season. They are looking forward to family time at the beach this summer while driving around in their 1973 VW Safari Thing that Ryan’s father gifted him, and are planning the kids’ first trip to Disney World in June.

Looking forward, Ryan hopes to have continued growth and success, “Working for a company like Oppy that is innovative, flexible and growth-driven offers a lot of opportunity for the company and the people.”