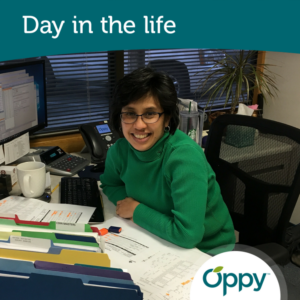 Originally from the Philippines, Liza received her bachelor’s degree in agribusiness and moved to the U.S. to get her MBA from Santa Clara University. After her studies, she worked as a senior accountant for Dole Fresh Fruit and then took on a new role as stay-at-home mom to her six children. Managing the yearly school fundraiser, being a room parent for several grades and being involved in extracurricular activities such as Girl Scouts, dance and volleyball kept Liza active over the years.

Liza recently celebrated her four year anniversary at Oppy Visalia, Calif. She was originally hired to cover a maternity leave and was later offered a permanent job. Since then, Liza helps teams move products from the exporter to the customer and prepares forthcoming deals. She enjoys the problem-solving aspect to her job as well as developing relationships with the various teams in the company.

With two kids in college, two in high school and two in grade school, Liza and her family start their day with a huddle just like the inventory team—a great way to keep track of the family of eight with their different activities, rides and meals. Liza and her husband try to get away on their own in the fall every year for their anniversary.

Truly enjoying the operations side of the produce business, Liza looks forward to continue using her finance background to contribute to the advancement of the company.