Day in the life… of Quality Controller, Ivonne Rodriguez 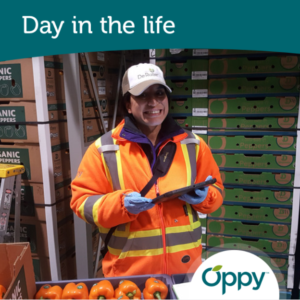 Ivonne is originally from Mayaguez, Puerto Rico where she graduated from the University of Puerto Rico in 2014 with an agricultural sciences degree with a major in agriculture technology. She went on to work at Sygenta Seeds in the irrigation-plant nutrition department for two seasons in which she gained experience in fertigation, irrigation and soil and tissue sampling.

She came to Arizona to work as a firefighter in the fire season and while she fell in love with the desert, she fell in love with her boyfriend and decided to call Rio Rico, AZ her new home. Hired at the Oppy Nogales, AZ office a few short months ago, Ivonne tracks inbound and outbound transfers, inspects samples and collects data. She prefers to work in the high season as she likes to keep busy.

A big animal lover, Ivonne has three dogs, a cat and a pigeon at her parents’ home in Puerto Rico and a dog at her home in Arizona—she has been vegan since 2015.

Ivonne is honored to have been hired at Oppy because she feels like she’s part of the family stating, “working at Oppy is a dream come true.”