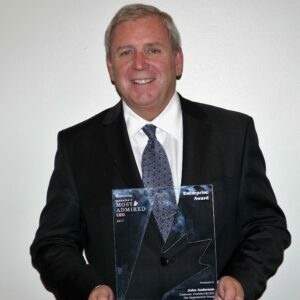 At a gala event in Toronto March 1, one of greater Vancouver’s most celebrated executives was honored among Canada’s Most Admired CEOs.

While the honor was announced last November, the awards ceremony, embedded in a corporate culture summit for company leaders and an exclusive CEO-only culture workshop, made it official.

Anderson was specifically selected for fostering a winning culture at Oppy, the leading international fresh produce marketer and distribution company, that enhances performance and sustains a competitive advantage. Anderson credits the company’s success to the combination of its collaborative strategic planning process and a culture backed by Oppy’s expect the world from us promise, which he introduced about 15 years ago.

As a result, Oppy—whose rich traditions and values have been preserved by Anderson as he progressed the company forward during his 43-year tenure—celebrates its 160th anniversary in this year.

“I continue to be extremely proud of the Oppy team and the amazing things we achieve day in and day out,” Anderson said. “While it is very gratifying to be recognized, my own admiration goes to the hard working, results-focused group that meets the challenges of our complex business with steadfast support of one another.”

Oppy itself was recognized as having one of Canada’s Most Admired™ Corporate Cultures last year and will hold the designation through 2018. The company was also recently recognized as one of Canada’s Best Managed companies for the 17th year, with 11 years in the program’s esteemed Platinum Club.

Anderson, meanwhile, has achieved numerous noteworthy honors, including most recently the 2014 Lifetime Achievement Award from the Chile America Chamber of Commerce, 2014 Business in Vancouver BC CEO Award, 2014 Acquisitions International Business Excellence Award, 2015 Ernst and Young Entrepreneur of the Year Award for Canada’s Pacific Region, among many others.