The making of Studio 58 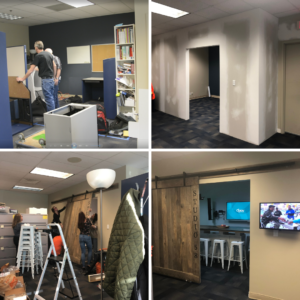 Do you love “Tasty” food videos and recipes? At the height of their popularity a few years ago, Marketing Communications Specialist Kelsey Van Lissum began working with a food content agency to develop recipe video content for Oppy items. As these videos became more frequent and Matt Del Biondi, graphic designer and video expert, joined the marketing team, Director of Marketing Services Cathie MacDonald brought the possibility of Oppy’s own in-house studio to light. After Kelsey and Matt did some research, the blueprints were being developed with the help of Marketing Specialist Shea Thomson by summer 2018.

“I have a tattoo of a Swiss Army knife that symbolizes the versatility of my skills—the ability to work with film, art, music and more. And that idea translated to the studio when we began planning the space,” Matt said. “We envisioned it similar to a Swiss Army knife in that it can act in different ways, be different spaces and you can easily move things around. Ultimately, we wanted everyone in the marketing department to be able to use it creatively, whatever that looks like to them.

The marketing team sends a big thank you to Facilities Coordinator Russell Watts who spent months leading the construction and pushing the project ahead even through the holidays. He managed builders, drywall contractors, electricians, painters and more. “We’re so grateful to Russell who was willing to make changes even after the walls were built,” the team said appreciatively.

Throughout this process, the team batted around names for the new space, and when Studio 58 was suggested (a take on Studio 54 and Oppy’s founding year 1858) it instantly stuck!

“Our biggest appreciation goes to Cathie in making the studio all happen! We’re so grateful she is always thinking about new ways we can innovate and make our team work more efficiently,” the team said of their marketing services director. The department also thanks CEO John Anderson and Senior Vice President, Categories & Marketing James Milne for their approval of Studio 58.

Though the team didn’t have an official grand opening earlier this year, as they got busy using their new space right away, they consider the day they hung the door, on January 25, 2019, its inception. Stay tuned for productions from Oppy’s own Studio 58 in the future!