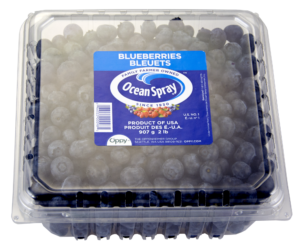 Oppy’s popular Ocean Spray® blueberries are ramping up to the peak of perfection just in time for July National Blueberry Month promotions.

Since 2017, Oppy has brought best-in-class blueberries to market under the recognizable and trusted Ocean Spray label, in addition to other successful berries and citrus lines. A snappy new branded master carton will deliver organic and conventional 6-ounce, pint and 18-ounce packs, as well as the 2-pound clamshell to market this summer. As well, Oppy is offering bright, eye-catching point of sale to draw attention to Ocean Spray blueberries on display.

As a premier grower, marketer and distributor of fresh produce from around the world, Oppy brings conventional and organic blueberries to market year-round, grown in California, as well as the Pacific Northwest and other international locales.

“Our Ocean Spray blueberries adhere to incredibly rigorous quality standards, and that means only the absolute best fruit makes it to the shelves,” said Oppy’s Vice President of Categories of Berries & Greenhouse Jason Fung. “By combining Oppy’s year-round growing with the highly-regarded Ocean Spray brand, we’ve been able to bring clarity and quality to consumers in a category that generally faces challenges with label pollution.”

The 2-pound clamshell and other larger sizes are becoming increasingly popular, with consumers starting to gravitate towards pack sizes that are made for sharing with family and friends as the summer swings into action, added Fung.

The Ocean Spray advantage was confirmed in independent studies, with 70% of survey participants noting that they were well aware of the Ocean Spray brand in the produce section. Coupled with the brand’s strong presence across the store, with an average of 52 Ocean Spray products on display, this works to bolster brand awareness and helps influence purchases. While Ocean Spray berries are purchased by one in five shoppers, more than half of those aware of the top brand would consider a future purchase, a testament to its consistently high quality.