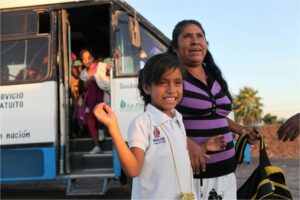 Oppy is no stranger to working with Fair Trade Certified™ produce, first joining the program in 2004 and increasing our volume consistently over the years. But to what extent has Oppy contributed and what do these contributions ultimately mean?

Since 2013, Oppy has generated over $4.3 million in premiums thanks to growing our sales of Fair Trade Certified produce. In 2018 alone, Oppy contributed over $839,000, with a 32% increase in Oppy’s sales volume from the first half of 2018 to the first half of 2019. The majority of these sales were of bell peppers, thanks to our work with longstanding partner Divemex in Mexico, who provided the first ever Fair Trade peppers in North America in 2011. Oppy is in fact a leader in terms of market share for Fair Trade Certified bell peppers, providing 85% of the market volume.

While these figures and statistics are impressive, what’s equally as impressive is the impact that lies behind the numbers. Fair Trade premiums go toward supporting healthcare, education, fresh water access and other essential programs in grower communities. The workers who produce Fair Trade Certified produce determine — and sometimes even develop — the programs which receive the premiums.

For example, Oppy’s sale of Fair Trade peppers and cucumbers from Divemex has funded essential and effective programs in both the Etzatlán and Culiacán regions. These programs include educational support that benefited over 1,000 students from elementary to adult education; dental clinic units that serviced over 800 people; four new ambulances and several home improvement projects such as new water tanks and critical building renovations.

Working with our Fair Trade partner Agricola Carmen Luisa in Peru, Oppy successfully supported a home improvement program that markedly increased living standards for 125 families in Ica. Oppy has also collaborated with AgroPiura on a number of projects including creating a water well to provide clean water to four communities, which improved the quality of life of more than 7,000 people, as well as spearheading an adopt-a-highway program. These are just a handful of the many ongoing projects that Oppy takes an active, leading role in implementing.

Watch this video to learn more about how the Fair Trade program supports the families that help feed all of our families.