Randhawa ramps up by cooling down 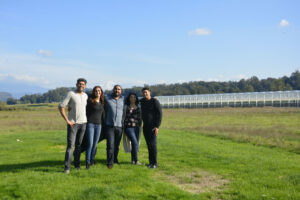 Randhawa Farms has established itself as Oppy’s cornerstone British Columbia sweet bell pepper program with the expansion of its cooler facility and greenhouse acreage.

Bringing in two new employees to manage the new packing and shipping lines, Randhawa harvests bell peppers from March to November with a year-round cucumber offering. Their high tech greenhouses currently hold over 60 acres of bell peppers, long English cucumbers and mini cucumbers, all with ongoing exceptional quality and flavor. The new cooler, packing line and staging area will ensure optimal temperatures are consistent throughout the packing process, thus increasing shelf life even further for the premium grown produce.

Randhawa will expand by 15 acres of bell peppers at the end of 2018 with a cutting edge packing line installed in time for next year’s season. “Randhawa has always built themselves around future expansion, and we value being part of these big steps in their operation,” Quon said.

Vijay Randhawa, Randhawa Farms’ executive director went on to say, “Oppy has been an exceptional support system within our team. They are consistently running reports and keeping an eye on our day-to-day to better prepare us for anything that could come up. We are so thrilled to be partnered with them because we couldn’t do what they do for us on our own.”

With more innovative developments on the horizon at Randhawa Farms, the team looks forward to the future as they settle into this new facility and acreage, Quon continued, “we’ve had a strong partnership for many years and look forward to growing with the Randhawa family as they continue to expand.”