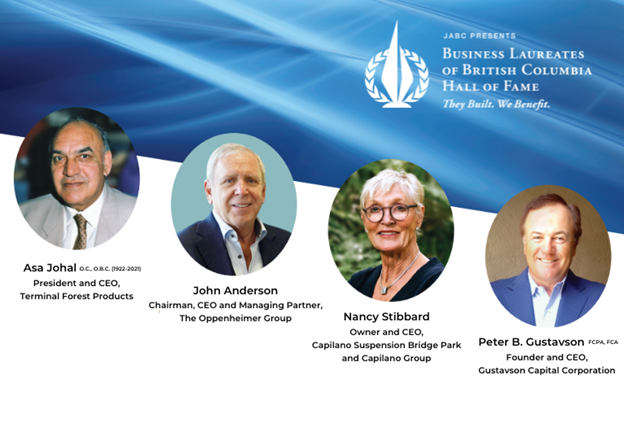 The award recognizes leaders who have exerted positive influence on the Canadian way of life and who stand to inspire leaders of the future to do the same. Each member of the Hall of Fame has demonstrated unique vision, supported others in pursuit of their goals, led lives of integrity and built a legacy that will enrich the lives of those who follow — in addition to outstanding business achievements with enduring contributions to British Columbians.

Anderson’s leadership of Oppy, BC’s oldest existing company with 164 years in business, brought him to the attention of the Business Laureates of BC. His contributions to the province and community, including support of the Global Civic Society, St. Paul’s Hospital, the CPET Lab at UBC Hospital and the Lion’s Gate Hospital Foundation continue to stand out, as well as his support of BC Transplant — flying nurses and doctors to various destinations to harvest organs for BC recipients on Anderson Air, Anderson’s private charter airline. Oppy’s support of BC Women’s Hospital, BC Cancer Foundation and BC Children’s Hospital in collaboration with Save-On-Foods was has thrived with Anderson’s leadership.

And of course, Anderson’s noteworthy support of Canadian fresh produce growers and the local economy exemplify Anderson’s contributions to the quality of people’s lives across the province.

“As an organization dedicated to inspiring and preparing young people to succeed, we’re very proud of the impact our inductees have made and the example they set for youth,” said President and CEO of JABC Sheila Biggers. “In addition, each of them demonstrates a significant commitment to their communities, in British Columbia and beyond.” Anderson’s fellow inductees for 2023 include Asa Johal, Nancy Stibbard and Peter B. Gustavson.

In 2014 Anderson was also awarded the Lifetime Achievement Award by the Chilean and American Chamber of Commerce. Pennsylvania Senator Michael J. Stack noted him as “someone who, through dedication and excellence, contributes in a meaningful way to the well-being of their communities and ultimately to all the people of this great commonwealth.”

“It’s an absolute privilege to be named to the Business Laureates Hall of Fame,” shared Anderson. “I consider myself lucky to have found my way into this great industry, bringing healthy, fresh produce to Canadians and beyond for nearly five decades. Ensuring that future generations will continue to have that available to them and investing in the leadership to do so is a passion of mine — aligning on that value with JABC, who does exceptional work supporting young people in their own success, makes this honor all the more important to me.”

This year’s induction ceremony will take place on May 30, 2023, with all net proceeds supporting the efforts of JABC in delivering work readiness, financial health and entrepreneurship programs to youth in urban, rural and Indigenous communities across the province.