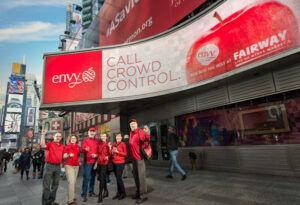 A group of Washington apple growers handing out apples beneath a bright Envy apple billboard in New York’s Times Square caused such a stir that throngs of curious onlookers stopped to catch a glimpse of the would-be celebrities.

“The crowd got so large that the local police came by to ensure it moved along,” said James Milne, Oppy’s executive director of marketing who was on the scene. “We rewarded the officers with Envy apples for their efforts, and all had a good laugh at the irony when we looked up at the billboard.”

The rotating billboard’s message at the time was “Envy – Call Crowd Control” reflecting on the response the Envy apple evokes, Milne said. “We see it at retail, at consumer events and on social media. Now, on the street. Envy always creates excitement when people experience their first taste.”

Other billboard messages include “Join the Feeding Frenzy” and “The Next Big Apple.”

“It has been a tremendous success,” said David Nelley, executive director for Oppy’s apple and pear categories. Oppy is the exclusive marketer of Envy apples in North America. “We decided to have a lot of fun with playful headlines, positioning Envy as the next big apple in one of the most iconic neighborhoods in the world—with messages targeting visitors and locals alike.”

Nelley noted that Envy growers and local customers are playing a leading role in what has become a highly integrated production.

“The Washington Envy growers traveled to New York City to sample at key retail outlets,” Nelley said. “Our customers built great displays, and shoppers loved meeting the growers and learning more about where the fruit comes from. At the same time, we played off one another’s social media outreach to create a lot of buzz around the apple, the demos, and the contests we currently have underway.”

Meanwhile, the high-energy Fairway Markets street team made a special appearance in Times Square to hand out individually bagged Envy apples and branded goodies to visitors from near and far.

“The apples generated loads of excitement, especially when people connected them with the billboard,” Nelley said, estimating that about 700 apples were distributed in less than four hours.

“Featuring a billboard in Times Square is statement to the trade and consumers that Envy apples are a contender in the new variety space. An outstanding product with the flavor to back up the hype,” he said. “There’s a lot of noise in the new apple variety section, however we see people really like the consistent quality that comes from Washington in the fall and New Zealand in the summer. This is hard to achieve and unique. Branded with a consistent message, trucks and billboards help spread awareness of the Envy apple and build fun relationships with retailers.”

Nelley noted that Oppy has placed Envy billboards in other markets, including Chicago, Kansas City and Des Moines, will help build brand awareness for the production lifts, expected 2016 and 2017

Washington Envy will be available from Oppy through March, with New Zealand fruit coming into season in June. More information is available at www.envyapples.com.